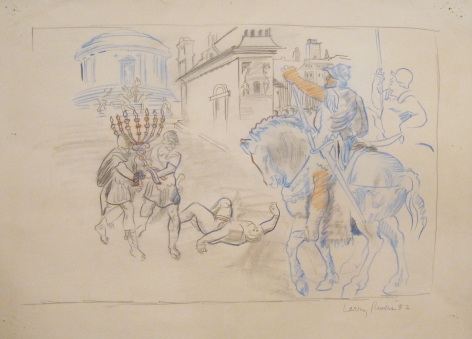 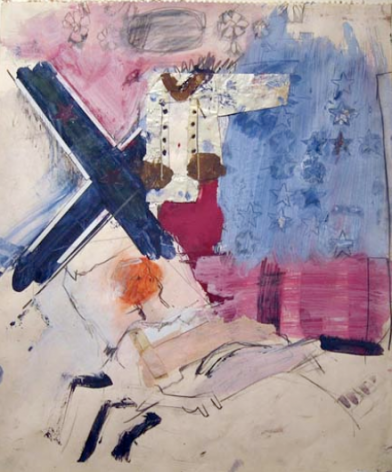 Larry Rivers (American, 1923–2002), renowned painter and sculptor, is best known for his figurative paintings, which combine a loose, luminous formal style with iconic works from art history, commercial culture, and everyday life. Rivers was born Yitzroch Loiza Grossberg in New York, and changed his name while a teenager. Interested in jazz as a youth, Rivers played the saxophone and studied music at The Juilliard School. Following a brief period of service in World War II, Rivers began to paint at the encouragement of his friends. He studied with Hans Hofmann in the late 1940s and, though he was influenced early on by Abstract Expressionist artists, chose to apply his skill in draftsmanship to works depicting naturalistic subject matter with loose, flowing brushstrokes. In the 1950s, he received both positive and negative critical attention for his appropriation of famous paintings in his own works, including reinventions of Emanuel Leutze’s Washington Crossing the Delaware, by Emanuel Gottlieb Leutze (American, 1816–1868), Olympia, by Édouard Manet (French, 1832–1883), and paintings by Rembrandt van Rijn (Dutch, 1606–1669), Jean-Auguste-Dominique Ingres (French, 1780–1867), and Paul Cézanne (French, 1839–1906).

Rivers’ work prefigured many of the concepts pursued by 1960s Pop artists; he incorporated items from mass media and commercial culture into his works, as well as unusual materials and found objects. Rivers also collaborated with several artists spanning different mediums, including set design, poetry, sculpture, and music; his interest in jazz consistently affected the rhythmic visual composition of his paintings. Beginning in the 1970s, Rivers used airbrushing, stenciling, printmaking, and assemblage in his art. In 1977, Rivers exhibited his work at documenta VI in Kassel, Germany, and he has held several retrospectives, including exhibitions at the Kunsthalle in Munich, the Stattliche Kunsthalle in Berlin, the Corcoran Gallery of Art in Washington, D.C., and the Whitney Museum of American Art in New York. Rivers continued several projects, including works concentrating on fashion, up until his death in 2002. He was 79 years old.